Hello hello! Spring is finally here and my allergies are not acting up for the first time in my life!

Our youth in VA had some interesting experiences during February and March. In February, we learned about famous Black activists, artists, and leaders in the US and around the world during Black History Month. In March, VA Programs Intern Eileen and I helped our youth to become young professionals by exposing them to a mock networking event. Inspired by Diane Bui, MD Middle School Program Coordinator, I proposed the idea to the youth that they would come to school dressed up and pretend to be themselves fifteen years in the future. It was supposed to be a networking/middle school reunion where AALEADers come back not only to reconnect with one another, but also to practice their public speaking, manners, and code-switching*.

The youth initially expressed uneasiness about the idea and many of them had worries common to the average middle schooler, such as awkward silences, dressing up, talking to people the did not know very well. Both Poe and Holmes AALEADers stepped up to the challenge after some words of reassurance along with the promise of snacks and refreshments. 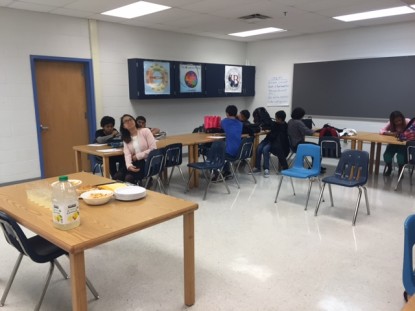 Introducing oneself and firm handshaking.
How to engage in polite conversation.
What topics were acceptable and not acceptable to discuss in a professional setting.
Understanding the idea of appropriate clothing depending on the surroundings. 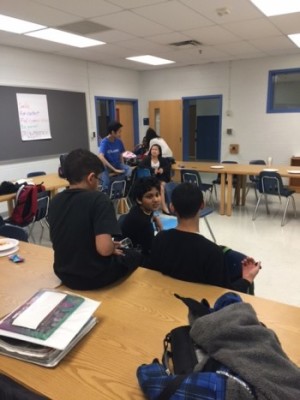 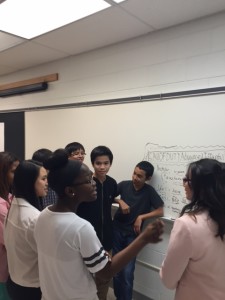 Tony B. (leaning on whiteboard) just finished explaining his YouTube ideas to his friends.

As I walking around the room at Holmes MS, I overheard some great conversations. For example, Tony B. was explaining to a group of AALEADers how even though his main job was working with animals, he has a side project involving YouTube ideas.
It was astounding how one can stretch his or her imagination.

Youth were making up all sorts of back stories about their lives, jobs, and even their families. We actually engaged in a conversation regarding our “children” and how hard it is to juggle different responsibilities along with raising kids. There were definitely awkward pauses and interactions but that was all part of the process. The youth really enjoyed the food and were happy to end the event with a cake to celebrate all the birthdays since October.

Here a few examples of the occupation AALEADers chose:

Holmes
Yeabsira G. was an pediatrician.
Salvon S. was an artist who graduated from Stanford.
Kevin T. was a famous basketball star who graced us with his augustic presence. 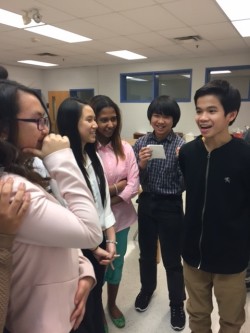 Ngoc P. was the owner of a successful Pho restaurant.

Poe
Kelly L. was a businesswoman who started a bakery venture based in Seoul, South Korea.
Nathanael A. was involved in coding and IT.
Daisy N. was a cartoon artist involved in animation.
Muyly O. was a famous YouTuber whose specializes in gaming walkthroughs. 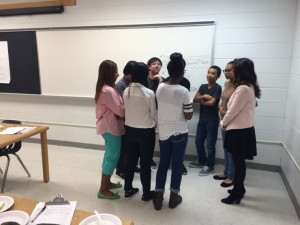 It warms my heart to see our youth learning lifelong skills through this networking experience. I hope they will remember this activity when preparing for an actual social/professional event many years from now.

* According to Dictionary.com, Code-Switching is the use of one dialect, register, accent, or language variety over another, depending on social or cultural context, to project a specific identity.